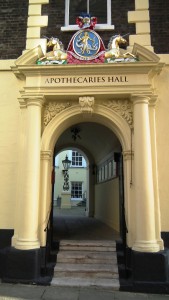 The Romans realised the commercial potential for a City located on the banks of a major river, which was easily accessible by sea from mainland Europe.

London’s growing prosperity was largely due to business flowing through it’s busy port, but the advent of the Guilds meant that future business within the walled City would be better regulated and structured.

The Guilds within the City of London started developing in the 12th Century and would go on to play an integral role in managing the city’s economic fortunes for centuries to come. The Guilds were religious and social fraternities, that prior to the advent of company Livery halls held meetings in local churches or in member’s homes. The powerful Goldsmiths Company typify the social roots that many Guilds grew from. They can trace their origins back to six interrelated families. During the early medieval period international trade flourished from the banks of the Thames, this was largely the domain of organised foreign trading companies. Domestic trade, however, became increasingly controlled by the Guilds, tradesmen like Grocers and Bakers, together with skilled craftsmen such as Weavers and Cordwainers (shoe makers), started to take more control of their own business positions within the city. They introduced a medieval version of a ‘closed shop’. The Guilds promoted members interests, regulated working conditions and wages, whilst keeping a high standard of quality, partly by denying non-members opportunities to trade within the city walls. A Guild member was also afforded a dignified burial, an important consideration in medieval times. Senior members helped govern the city from the newly built Guildhall in the 12th century, making Henry Fitz Ailwyn (Draper) the first Lord Mayor in 1189. They have supplied eminent members for the governing body of the City of London ever since.

To uphold their reputation for quality, the Guilds would only allow 3 means of entry into their organisations.

Servitude, Apprenticeship of 7 years, under a Master Craftsmen.

Patrimony, at your conception, if your father was a member of a Guild.

Redemption, pay to be a Livery person. An oath of initiation was also required.

The Guilds started to obtain Livery (uniform) during the 12th Century, the Weavers being the first to receive a Royal Charter in 1155. To become a Livery Company a Guild must first receive a Royal Charter of Incorporation, effectively giving them a monopoly of their trade or craft within the city. Subsequently, a grant of Livery from the City of London Corporation is then required. Any prospective Lord Mayor must have first been a Liveryman to be even considered for the position.

Competition among the organisations grew, occasionally spilling over into open warfare. One of the more notorious confrontations took place in 1267. Members of the Merchant Taylors and Goldsmiths Companies were having an altercation in the street, when they were joined by allies from the Clothworkers’ and the Cordwainers. A full scale battle ensued involving up to 500 people. Several people died, scores more were injured. Thirteen people were subsequently hanged.  In 1515 a financial based pecking order of Livery Companies was established, resulting in the formation of the ‘Great 12’, as they would come to be known.

1.  The Worshipful Company of Mercers

2.  The Worshipful Company of Grocers

3.  The Worshipful Company of Drapers

4.  The Worshipful Company of Fishmongers

5.  The Worshipful Company of Goldsmiths

6.  The Worshipful Company of Skinners *

7.  The Worshipful Company of Merchant Taylors * 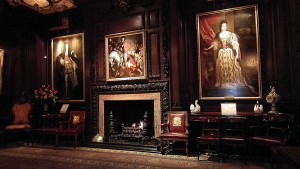 8.  The Worshipful Company of Haberdashers

9.  The Worshipful Company of Salters

10.  The Worshipful Company of Ironmongers

11.  The Worshipful Company of Vintners

12.  The Worshipful Company of Clothworkers

*A centuries old dispute involves the Skinners and Merchant Taylors, who both believe they should be number 6 in the order of precedence. Every Easter the two companies exchange places and are positioned accordingly in the Lord Mayors Procession, this is contentiously thought to be the origin of the phrase ‘At sixes and sevens’.

The 14th Century saw the introduction of Company Halls for meetings and ceremonial events. The present Goldsmiths Hall is the third on the same site since the original was built in 1339. Each organisation traded within a small area of the city. An enjoyable stroll can be had tracing their ancient locations, sometimes given away by street names such as Ironmonger Lane, Masons Avenue, and Bread Street. 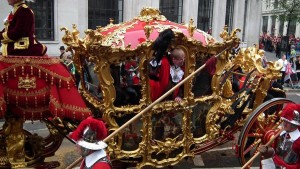 Mayor, he is a former Master of the Worshipful Company of Fletchers. The Fletchers Company date back to the 14th Century, and were the makers of arrows used in medieval warfare, including  those used in the battle of Agincourt in 1415.

It was agreed in 1371, after the Fletchers petitioned the Lord Mayor, that the related trades of the Bowyers (Longbow makers) and the Fletchers, should remain two completely separate trades. These days, with bows and arrows no longer a winning combination in the theatre of war, both companies focus on supporting their nominated charities and enjoy an annual archery match against each other, held within the moat of the Tower of London.

In 2013 Fiona Woolf became only the 2nd ever female Lord Mayor of London, she is a member of the Worshipful Company of Solicitors. Her title as Lord Mayor remains the same as her male equivalents through history. Her husband becomes ‘Lord Mayor’s Consort’, if she was unmarried her partner would become ‘Lord Mayor’s Escort’.

Remarkably, many of the ancient institutions still exist. Most are charitable organisations, but others still give guidance and exert their influence over their historic trades and crafts. The City and Guilds educational organisation was founded in 1878 by the Corporation of London and leading Livery Companies. The 108 Livery Companies include several modern additions during the 21st Century. The 20,000 strong membership donate more than £40m annually to good causes.